A new report from the Child & Family Research Institute (CFRI) in collaboration with the University of Houston shows that undocumented parents of minor children in Texas experience high levels of parenting stress associated with severe depressive symptoms, and that many parents don’t have an explicit plan for the care of their children in the case of deportation. The report (pdf) is coauthored by Jodi Berger Cardoso from the University of Houston, and Monica Faulkner and Jennifer Scott from the UT Austin School of Social Work. 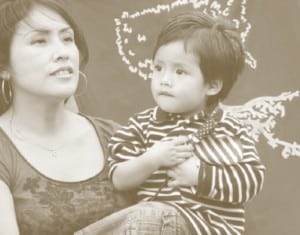 “Changes in our immigration policy have resulted in a dramatic increase in the number of detentions and deportations. We wanted to know how the continuous threat of deportation made an impact on undocumented parents’ everyday lives and parenting decisions,” said Faulkner, who directs CFRI.

Although participants reported talking about the need of having a plan for their children should they or their partners be deported, very few took concrete steps such as designating a caretaker. The study also found that parenting without documentation changes family dynamics. Children often take on responsibilities such as translating for adults, and they commonly feel they are responsible for fixing their parents’ status.

“Some parents reported feeling disempowered by this change in family dynamics, and mentioned that this power shift made disciplining their children more challenging,” Scott said.

Researchers interviewed 40 undocumented individuals, 20 in Houston and 20 in Austin. All participants were parents 21 years of age or older. The majority (80%) were married or in a committed relationship, and they had on average three children. Many families were mixed status, reporting on average two children who were U.S. citizens. None of the participants had been deported or were in deportation hearings.

Researchers used standardized questionnaires to measure stress, depression, food insecurity, and social support. In addition, they conducted oral interviews to discuss participants’ experience living in the U.S. without documentation and how it affected their parenting.

About 25 percent of the interviewed parents showed symptoms of clinical depression, which were associated with higher levels of parenting stress. Almost 23 percent of parents reported that their children hoped to fix their legal status for them. Although 50 percent reported talking about the need of having some type of plan in place should they or their partners be detained or deported, less than 10 percent reported having taken a concrete step in that direction.

It is estimated that 6 million of the 11 million undocumented individuals living in the U.S are parents of minor children. The majority of children with at least one undocumented parent are Latino, mostly from Mexico.