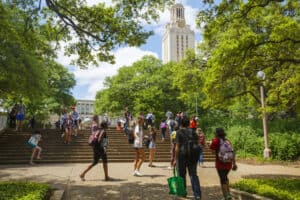 The Association of American Universities (AAU) surveyed more than 150,000 students at 27 participating universities for its Campus Climate Survey, including more than 6,600 students at UT Austin. The survey looked at a variety of issues related to sexual assault and misconduct including campus climate, student awareness of resources to prevent and respond to assault, the frequency and nature of assaults, misconduct resulting from coercion and the absence of consent, and incidence of sexual harassment, partner violence and stalking.

Key findings nationwide and for UT Austin include:

“The AAU survey gives us a good benchmark for looking forward,” added Noël Busch-Armendariz, social work professor and director of UT Austin’s Institute on Domestic Violence and Sexual Assault. Busch-Armendariz is currently leading an effort by the University of Texas System to conduct a comprehensive four-year study of sexual assault at all of the system’s campuses.

“The AAU survey will positively inform our work as we prepare to implement a longitudinal study across 13 UT System institutions.”

Busch-Armendariz recently completed a statewide assessment of sexual assault in Texas that found similar results, suggesting that sexual assault is a crime affecting both genders and that society should be particularly concerned about the vulnerability of college-age women.

According to the AAU survey, 63.3 percent of students nationwide and 61.9 percent at UT Austin think that a report of sexual assault or sexual misconduct would be taken seriously by campus officials. At UT Austin, 47.4 percent of students consider it very or extremely likely that campus officials would conduct a fair investigation, compared with 49.2 percent nationally.

Read the press release from UT Austin. Results from both the complete national AAU survey and UT Austin campus survey are available online.