Skip to content
Home » Research » Will they turn you into a zombie?

New synthetic drugs, known in the streets with varied names such as Spice, K2, and Bath Salts, dominate the number of psychoactive substances identified by law enforcement laboratories across the United States in 2012, according to a study by Dr. Jane Maxwell, a senior research scientist with the School of Social Work’s Addiction Research Institute. (Watch a video about Maxwell’s research).

Maxwell found that fifty-three percent of all clandestine lab products identified by Drug Enforcement Administration (DEA) in 2012 were synthetic cannabinoids, a lab product with varying chemical composition that mimics the effects of marijuana. Another eighteen percent corresponded to synthetic cathinones, which mimic the effects of ecstasy.

One of Maxwell’s goals is to get the word out about these new synthetic drugs to social workers and other clinicians working with people at risk of substance abuse. Together with colleagues, she has developed a training for clinicians that is available free of charge.

“Unlike classic illicit drugs such as heroin or cocaine, synthetic drugs have only appeared in the United States in the past few years,” Maxwell explained. “What we know is often based on media stories and street information from users, with little confirmation of the chemicals in these drugs.”

Synthetic drugs made the headlines in the summer of 2012, when 31-year old Rudy Eugene, supposedly under the effects of Bath Salts, perpetrated a brutal face-eating attack on a homeless man in Miami. Although medical exams would eventually prove that Eugene had only consumed marijuana, this story triggered a zombie-cannibal hysteria associated to Bath Salts.

Maxwell said that researchers like her are trying to counteract sensationalized stories in the media with the hard work of identifying the psychoactive substances in these new synthetic drugs, which are less well known but created to mimic older synthetic drugs such as LSD and ecstasy.

“These new drugs are often marketed as legal highs,” Maxwell explained. “Manufacturers are constantly creating and marketing new variations to the formulations, so they can stay ahead of the latest federal and state legal definitions and laws to avoid prosecution. One almost needs to have a background in organic chemistry to understand their content and their effects.” 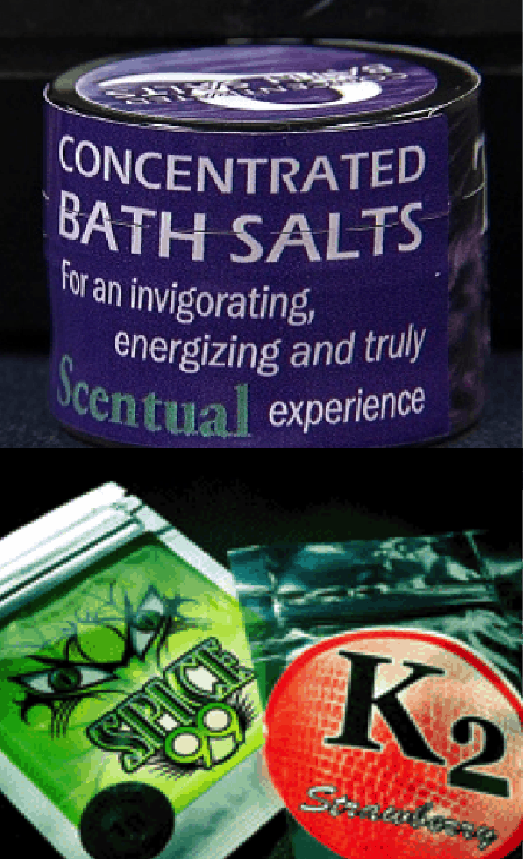 Synthetic cannabinoids are often sold as Spice, a substance that looks like plant material but it is coated in chemicals. Spice comes in colorful three-ounce plastic pouches decorated with psychedelic designs, and is marketed as a safe, herbal alternative to marijuana. Synthetic cathinones, meanwhile, are usually sold as Bath Salts, a powder laced with a cocktail of chemicals. Manufacturers seeking to evade regulations often label the salts as “not for human consumption,” with varying uses including aromatic potpourri, plant food or insect repellant.

In addition to monitoring data from forensic laboratory, Maxwell has collected data on human exposure calls to poison control centers and treatment programs.

“Due to the variation in chemical additives, users don’t know exactly what they’re getting in each packet or the dose level and the effects can therefore be unpredictable, or deadly,” Maxwell said. “Evidence is growing that cannabinoids and cathinones can trigger psychotic episodes, especially among users with a positive family history of mental disorders.”

Maxwell found that, in 2012, users of these drugs tended to male and young, with low levels of employment and high levels of legal problems. She said that one reason why these synthetic drugs might be attractive to them is because the chemicals defy detection in traditional drug tests.

Maxwell stated that her preliminary analysis of 2013 forensic laboratories data shows that the number of items identified as cannabinoids peaked in 2012 and then decreased, while the number of synthetic cathinones has held steady. Still, both substances combined make up for seventy percent of all identified items.

“We need to avoid sensationalizing the use of these drugs,” Maxwell emphasized. “The task is to disseminate creditable data and emphasize the more serious side effects commonly seen in emergency departments and hospitals.”