Barbara W. White, dean emeritus, passed away July 19 at her Austin home surrounded by her family. She was 76. Service will be held Tuesday July 30, 11:00 a.m., at The Bethel Church, 215 Bethel Baptist St., Jacksonville, Florida.

White was born Feb. 26, 1943, in Jacksonville, Florida. She received a Master of Social Work and a doctorate in political science from Florida State University (FSU). Prior to joining The University of Texas at Austin, she was associate dean at the FSU College of Social Work, where she also directed the master’s degree program and received a University Teaching Excellence Award.

White was the first African American dean in The University of Texas at Austin’s history. She led the School of Social Work’s successful efforts to meet new accreditation standards, achieve a national ranking among the top 10 schools of social work in the country, and participate in visionary efforts to enhance research and evidence-based practice. She was the recipient of the university’s Presidential Citation in 2012 for her work catapulting the school into a nationally recognized position of leadership.

White was an accomplished scholar in the areas of cultural diversity, women, and domestic violence. She was actively engaged in social work education and was the only person in her profession to hold the presidencies of both the National Association of Social Workers (NASW) and the Council on Social Work Education (CSWE). 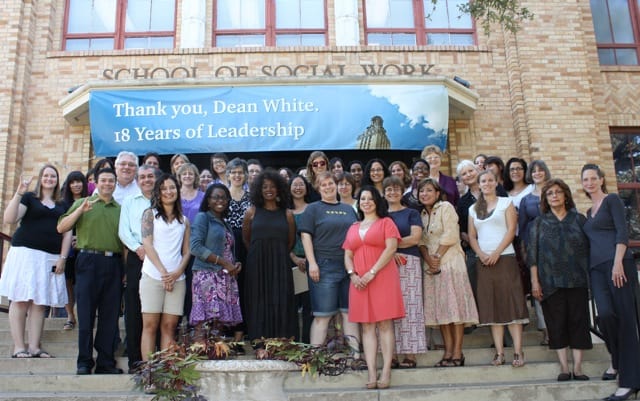 Upon her retirement in 2011, White was named dean emeritus in honor of her outstanding 18 years of leadership and distinguished career. She oversaw the education and training of thousands of social workers, contributed to the knowledge of many more through her scholarship, and was always glad to help those who needed her leadership, her compassion and her integrity. Her legacy lives in the work of all these individuals, who every day are making a positive impact in the lives of individuals, families and communities.

“Dean White was a trailblazer as one of the most significant academic leaders in our university’s history,” said UT Austin President Gregory L. Fenves. “As the first African American dean at UT, she rose to the top of her field and was a national leader in social work education and research. Her legacy and accomplishments will inspire generations of future social workers at UT and throughout the nation.”