When Texans think of human trafficking, they often focus on the victims of sexual exploitation. While it is certainly a heinous form of trafficking, where we’ve missed a step in addressing the problem is assuming that sex trafficking is the biggest issue. We have yet to fully understand the most common form of exploitation in Texas and across the nation — labor trafficking. 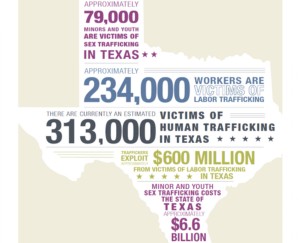 The U.S. labor force participation rate is at 63 percent, similar to that of Texas. According to the U.S. Bureau of Labor Statistics, about 45 percent of that workforce labors in the service, construction, natural resources, production and transportation industries — all considered blue collar or manual labor. From the cars we drive, the food we eat, clothes and jewelry we wear, energy we use and buildings we occupy, to the phones we communicate through — we play a role in the labor experience of others as much as they do in ours. Meanwhile, each of the daily needs just listed has faced egregious cases of labor trafficking in its respective industry.

We know that human trafficking in Texas is happening, and there is not a space within our state that is safe from the risks and vulnerabilities that attract opportunistic exploiters. A recent study showed that nearly 234,000 workers — both U.S. citizens and immigrant labor — are currently at risk of exploitation and trafficking at various job sites throughout Texas. Annually, workers are robbed of $600 million by traffickers exploiting them through elements of force, fraud, or coercion.

We also know that human trafficking, regardless of what we see in the media, is not a monolithic experience. It is not as covert as a bound young girl in a dark basement. It looks like the chance to pay rent in exchange for a laborer breaking his back while roofing a home. It can be the promise of a family given to a boy seeking a home in exchange for selling magazines or pirated movies door-to-door. It’s telling a woman that she can’t see her family until she has paid a debt by cleaning homes 18 hours a day. The tactics most often used by traffickers make it seem as if victims have an active role in their exploitation. Because of this, a ramification for victims is their own inability to realize that they are being exploited. And that’s the problem — how can you help people who believe that they have chosen their own abuse?

If we are going to make a serious commitment to address human trafficking in Texas, and if we truly aim to make a dent in the numbers of estimated victims, then we first have to accept that we interact with labor victims in our everyday lives. When discussing sex trafficking, it is easy to vilify those who benefit from the exploitation — namely the trafficker and, in a secondary role, the customer. But the truth is that when it comes to labor trafficking, we all benefit.

We must acknowledge that labor is an inescapable reality of our existence. Because of this, we must learn the different vulnerabilities that put different populations at risk of trafficking and rid the narrative of the stereotypical exploited worker, which would also serve us well in addressing sex trafficking. Taking it a step further, we must address those vulnerabilities through preventive and development measures. So long as poverty and inequity in access to education, health care, housing and nutrition, and insufficient responses to violence, abuse, conflict and disaster exist, so will the trafficking of persons who are subject to those injustices.

Exploitation varies by region, population, vulnerability, demand, and, ultimately, by each victim’s experience and by the ever-changing tactics of exploitation used by traffickers. As such, there is no one answer to end human trafficking. So, as we continue to learn about what human trafficking looks like in our state, we all still have much to learn, much to do to lessen the risks of exploitation, and many potential situations of trafficking to identify. But, most importantly, we have to face our own roles in the trafficking of laborers.

Melissa I. M. Torres is the director of the human trafficking research portfolio in the School of Social Work at The University of Texas at Austin. This opinion piece was produced for Texas Perspectives and represents the views of the author, not of The University of Texas at Austin or the Steve Hicks School of Social Work. A version of this opinion piece appeared in the Dallas Morning News.