Skip to content
Home » News » Surveys for a better Texas
This is the first article in the series, “Celebrating 40 years of doctoral education and  research at the School of Social Work, 1974-2014.”

If you are a Texas resident, you most likely have been to a driver’s license office. Or used a state-inspected elevator. Or visited a state park. But, did you know that all these state agencies connect back to the School of Social Work? “How,” you may ask.

Meet the researchers at the school’s Institute for Organizational Excellence (IOE).

“We work to improve state government. Every two years, we survey every employee in every agency in the state of Texas. We ask about everything, from how satisfied and engaged with their job they are to what they think about supervision, training, benefits, and so on. The survey allows us to gather opinions across the state, and pull all the information together for each agency,” explained Noel Landuyt, IOE director.

Texas is the only state in the nation with an ongoing and comprehensive employee engagement survey like this. Results are shared with all parts of the Texas government, from the governor’s office to the legislature (see for instance IOE data on the state auditor’s workforce summaries).

It all started with a governor’s request

The survey started in 1979 as a specific request of governor William Clements, who wanted to know how employees felt about working for the state of Texas—something they had never been asked before. Peter Flawn, president of The University of Texas at Austin at the time, connected Clements to the School of Social Work as the place with the research expertise to accomplish the task. 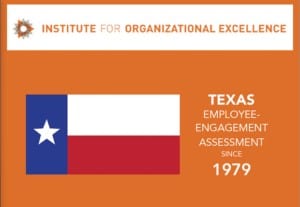 “It might seem strange today, but business was not really there yet,” Landuyt said. “Back in the 1960s and 1970s, you really didn’t have organizational development coming from the business school, or human resources as a developed discipline. But at social work you did have the knowledge and ability to do assessments, create questions, administer surveys, and process data.”

Michael Lauderdale, IOE founder, and Martha Williams, a professor and later dean of the School of Social Work, designed the first version of the survey. In the 1990s, under Lauderdale’s leadership, the survey was updated and expanded. By 1996-1997, response rates had jumped from 32 to 52 percent, showing that state employees saw the survey as a useful tool to express their opinions and voice their concerns. About the same time, at the urging of the governor and the legislature, all state-supported organizations were expected to participate in the survey.

In 1999, the Texas legislature required all state agencies to assess and report customer satisfaction as a part of their strategic plans. Several state agencies contracted with IOE for these assessments. For instance, when the Department of Public Safety (DPS) received funding to build driver license mega-centers in order to improve customer satisfaction, it hired IOE to assess customer perception.

“We were able to show the legislature that the investment in DPS mega-centers dramatically improved the ability of this agency to satisfy citizens and provide outstanding service,” Landuyt said. “The interesting part for us is that in the midst of the current pessimistic attitude about governmental services, we were showing that the mega-centers actually increased citizens’ public trust in that agency to do a good job.”

For the IOE team, this is the key to the survey work they do with state agencies. All those seemingly dry survey results are actually measuring something almost intangible called social capital—a concept made popular in the social sciences and civic work by sociologist Robert Putnam. 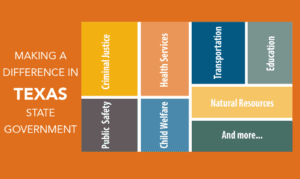 “Social capital refers to the quality of interactions among individuals within organizations and in the community,” Lauderdale explained. “To the extent that people trust each other and are willing to provide help when needed, high social capital exists. High social capital results in greater safety, prosperity, health, and innovation.”

“Industries take this incredibly seriously; they know that the level of engagement of their employees has a direct impact on how much money they make, and they know that they have to be attuned to how satisfied their customers are,” Landuyt added. “State agencies are not different, except that their end goal is increasing public trust and reciprocity with the citizenry instead of increasing profits.”

Training the next generation

Since the survey was first administered in 1979, much has changed in Texas. The state has experienced tremendous growth in population and prosperity, and faced the challenges that come with such growth. Lauderdale and Landuyt want to make sure that, just as in 1979, social work continues to be a resource for leaders seeking to improve organizations—both in the public and private sectors.

“We want to make sure that School of Social Work graduates bring the tools they learn from macro-practice research such as the survey to the hundreds of private and public organizations out there,” Lauderdale concluded. “In this way, we exponentially multiply the efforts to build trust and responsibility within organizations and with clients and citizens.”