The 2016 presidential election had just finished when Ruben Parra-Cardona, an associate professor at the Steve Hicks School of Social Work, stood in front of his first Austin-based parenting intervention group of Hispanic parents. He expressed his gratitude that they still attended the group during “difficult times.”

“We don’t ask about immigration status, but I can imagine as a Latino community, it is something that is on our minds,” Parra-Cardona said he told the parents.

One mother stood up in response and proudly declared that nothing would prevent her from becoming a better mother. “We’re here because we want to be better for our children,” she said. The other parents in the room cheered in agreement.

“That kind of response tells you about the amazing strength of the community,” Parra-Cardona said.

There are already successful parenting interventions for low-income white populations, Parra-Cardona said, and these might address some parallel contextual issues that Latino communities experience — like a reliance on welfare systems or a history of trauma. However, Parra-Cardona’s cultural adaptation of the original mediation model includes issues specific to Latino communities like immigration, discrimination, and language barriers.

“I want to focus on providing alternatives for these families to raise their kids in a different way within the context of oppression that they have experienced,” Parra-Cardona said. “There are so many societal challenges that low-income Hispanic families must overcome, like disproportionate minority confinement and disparities in education and healthcare systems.”

“I think Austin represents many of the opportunities and challenges in the United States for immigrant populations,” Parra-Cardona said. “There’s a wide range of human rights violations, but there’s also testimonies of resilience among immigrant communities that happen in the same place.” 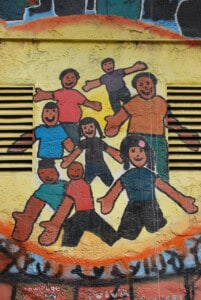 One discrimination case that his research team reported included a child who was bullied at school because his parents were immigrants. The child began to have suicidal ideations, but the parents described to the group how they worked with the child’s school to resolve the issue and reach a successful outcome.

“Parents really appreciated that we provided a space to talk about discrimination in their lives,” Parra-Cardona said. “So we address how to handle discrimination and how parents can talk to their kids about it.”

To maximize cost-effectiveness, the parenting intervention intensively discusses biculturalism in one session, which focuses on an acculturation gap that exists between immigrant parents who adhere to Latino cultural values and  their children when they have assimilated to U.S. values and traditions.

“We explain that many of the problems these parents have with their kids are cultural conflicts and that the problem isn’t their kid. There’s risk for that acculturation gap to lead to conflict, which increases the risk of these children engaging in internalizing or externalizing behaviors,” Parra-Cardona said, citing examples like sadness and depression or rule-breaking and aggression.

“I was not expecting that the biculturalism component was going to have such an impact on parents, but it worked really well,” he said. “Parents moved away from labeling the child as rebellious to instead understanding they were in two different worlds.”

Parents learn one key skill per session, and they must attend at least six of the nine sessions to graduate from the program. Most parents come into the course wanting to improve their limit-setting abilities, but Parra-Cardona says the intervention teaches that skill at the very end.

“In Latino communities, respeto is a very important value so we validate that,” he said. “But we tell them that if we start with limit-setting, they will start by overlooking the strengths of their kids. We want parents to start by looking at themselves and seeing how they are giving the most important parenting instructions so we can give them feedback on that.”

Parents in the groups learn weekly skills through role-playing. Instructors demonstrate scenarios where they enact the unproductive way to perform a skill followed by a productive method. One of the most impactful skills that Parra-Cardona said the program offers is how to properly give instructions to an adolescent. Parents learn to give directions calmly and firmly without yelling or begging.

“The natural reaction we get from many parents is, ‘Oh my gosh, it was me who was wrong by yelling at my kid and being intimidating. I don’t want to be that parent,’” Parra-Cardona said. “But that comes as a result of engaging parents in role plays instead of just telling them how to do things.”

However, parents might not buy into the methods at first, Parra-Cardona said.

“We tell them they all have the right to be skeptical,” he said. “We don’t ask them to believe in it, but we just ask them to try it. And when at least one parent tries it, you have a snowball effect.”

Parents bring back moving anecdotal evidence to their group sessions. Parra-Cardona said that it’s not unusual for parents to cry in the third session after trying the new skill of giving directions.

“We might have a parent who cries and says that their kid told them ‘I love you’ for the first time because the parent finally stopped yelling at the child,” he said. “The parent will explain that by asking for something in a polite, clear way followed by praise, the child actually did what was asked. They start having conversations with their child about getting along better.”

To determine the success of the project, Parra-Cardona says that his team measures the likelihood of use and perception of harm of drugs among the adolescents of the participating parents. They also interview these adolescents about their parents’ parenting practices and their own behaviors. Lastly, researchers consider the retention rate of parent participants, which Parra-Cardona said is currently at about 90 percent.

“Even in this anti-immigration climate, our families have responded really well,” he said. “The majority of them make less than $30,000 a year as a family, many are struggling with immigration issues, yet you have this extraordinary retention rate that tells you so much about the resilience of this population.”

Colleagues of Parra-Cardona are working with him to duplicate the study in Mexico City. He has also started to communicate with local leaders in Austin to discuss the possibility of moving the project into large-scale implementation in the future.

“It’s really about the energy of doing things while respecting the timing of the communities and what they consider to be most important for moving on to the next phases of research,” he said.