“Getting drunk one time can cause you to lose 14 days of training effects and gains,” a Texas Track & Field athlete says in a public service announcement video about SUPP, a Substance Abuse Prevention Program at Texas Athletics.

“You know, 50 percent of college athletes have never used alcohol while in season,” a different athlete chimes in.

“Don’t try to be an all-American and all-6th Street,” quips another.

Social work student Todd Smith helped write and direct this video during his internship in the Texas Athletics Behavioral Health department. The SUPP program is one of several initiatives that Smith helped launch, under the supervision of professor Emmett Gill, director of Student-Athlete Wellness and Personal Development.

“The program consists of 15 students, and we do events throughout the year focusing on not using substances for athletic reasons as opposed to ‘it’s not legal,’” Smith said. “We really focus on communicating how substance abuse affects your performance as an athlete.” 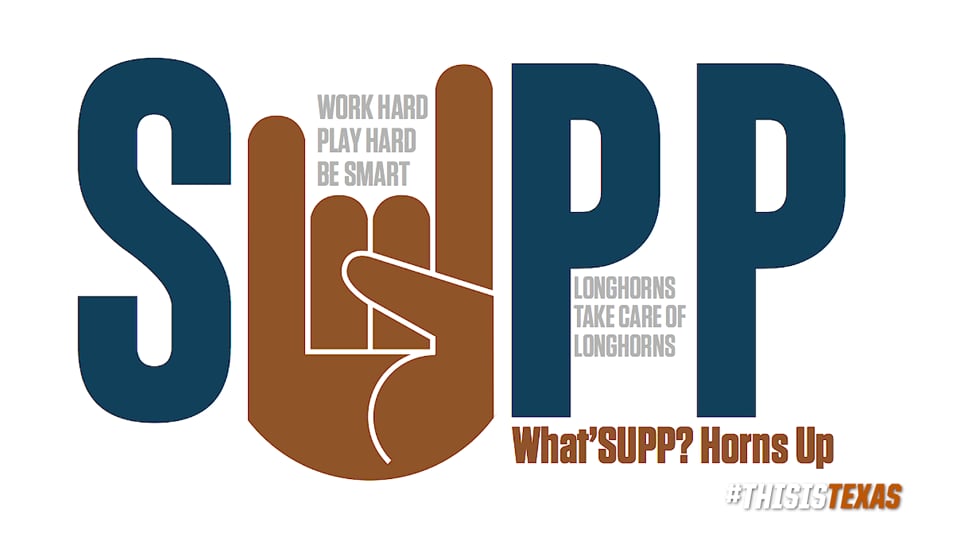 Now in his second year as a master’s student at the Steve Hicks School of Social Work, Smith continues to work with Gill.

“Working with Dr. Gill has been amazing because he lets me collaborate on absolutely everything and my ideas are welcome,” Smith said. He added that the position isn’t for the type of person who needs a lot of instructions. “It’s a lot of problem-solving and trying to figure out the projects you want to accomplish.”

For example, Smith developed a program based on ESPN’s 30 for 30 documentary series about sports history, and presented it at a Fellowship of Christian Athletes meeting. He and the SUPP student leadership group created the “TANC games,” where athletes compete weekly to answer questions about substance abuse and performance while eating lunch in the Texas Athletics Nutrition Center. Smith’s latest project is a video about athletes discussing anxiety and depression via texting.

Smith is also responsible for outreach, which involves going to different sports practices to meet coaches, trainers, and athletes. He said this is especially important for explaining the different clinical resources student athletes have access to through the Behavioral Health department. These include one-on-one counseling; Team Grit, a support group for injured athletes; and transitioning assistance for sophomore and junior athletes to get them ready for life after college.

“Within athletic culture, it can be difficult for people to pursue mental health treatment because of the stigma around it,” Smith said. “They think it’s a sign of weakness, and that’s really difficult to get past to.”

But there are signs of change. Male athletes have begun to utilize behavioral health services, Smith said, when at the beginning students doing so were predominately female.

A common misconception is that student athletes receive enough supports and do not need mental health services. But in fact, Smith explained, while student athletes may be privileged in some regards on campuses, they have very regimented schedules that often isolate them from other students. They also may come from challenging backgrounds and broken homes, which compounds with the tremendous pressure already placed on them to perform well on the field.

“There’s something very odd about our culture and how we view athletes, that somehow once they put on a helmet or a uniform, they cease to be a person and become an ‘athlete,’” Smith said. “We put them on this pedestal, and the reality is that these are just 19- and 20-year old kids that have the same challenges that everyone else does.”

Smith speaks from his experience as a former high-school hockey player in his home-state of Minnesota. Although he played through high school, and even played in the final state tournament, he said he was ready to be done with sports due to his experience with a fairly abusive coach.

This understanding of athletic culture has allowed Smith to connect with the students he works with. And although he no longer plays organized sports, Smith has deep interest in the social justice issues surrounding athletics.

Finding out about the combination of sports and social work was “serendipitous” for him, he said. He had never heard of social work and sports going together until social work student orientation in 2017, when he heard Gill speak about his work with Texas Athletics.

“I was really moved by what he said, and I thought, ‘Wow, that might be the reason I’m here,’” he said. Unknown to Smith at the time, he  had already been selected for the field placement with Texas Athletics Behavioral Health Department.

In addition to his many endeavors with Texas Athletics, Smith has taken on one extra responsibility.

“I like to think that my job also includes letting people know that social work can be many different things, and that one of them can be working in athletics,” Smith said. “So, when I meet students who want to stay in athletics but also have a social work mindset, I tell them that there are options for them.”