On May 22, 2011, a highly destructive and deadly tornado tore through the town of Joplin, Mo. Over Labor Day weekend, Sept. 3-5, a group of students from the School of Social Work, members of the Social Justice Action Coalition, a student organization affiliated with the UT Austin School of Social Work, traveled to Joplin to assist with ongoing recovery efforts. 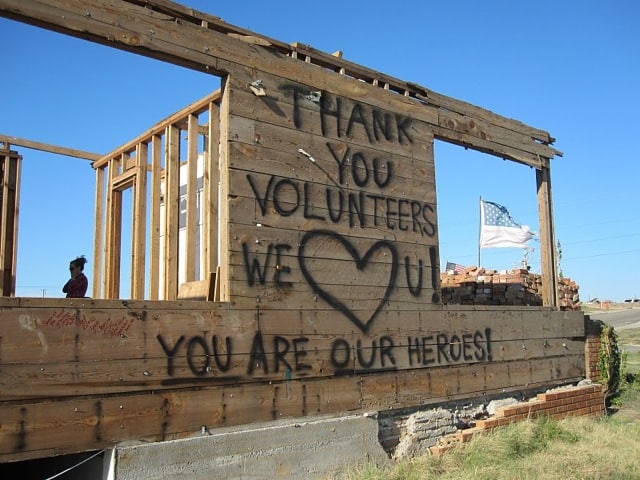 In the following article, Social Work graduate students Robbie Spears and Clayton Travis reflect on their experience in Joplin and what they learned.

From the vantage point of a hillside overlooking Joplin, Mo., the scene can only be described as complete devastation. The skeletal remains of bare foundations offered the only evidence of the homes that once existed and the families within them. Trees stripped of their branches, some with sheet metal bent around them, stand as ghostly testament to nature’s fury, a force that tore through the heart of the town. Much of the debris has been cleared in the past three months, but much more work remains for survivors and relief workers.

On Sunday, May 22, as families sat down for dinner and just after Joplin High School students had stepped across the stage to receive their diplomas at commencement, an EF5 tornado with winds in excess of 300 miles per hour ripped a mile-wide gash along Joplin’s main street. The tornado claimed 156 lives and left in its wake billions of dollars in damages. Images of the devastation and tragic loss of life flooded the media last spring, and Americans responded generously with donations of money, time and energy in the tornado’s immediate aftermath.

However, with the passage of time (and new natural disasters in other regions of the U.S., such as Hurricane Irene), the attention of disaster relief groups and the number of volunteers in Joplin has dwindled. As members of the Social Justice Action Coalition (SJAC), a student organization affiliated with the UT Austin School of Social Work, we spent the first week of the fall semester raising awareness of Joplin’s continuing needs and raising funds through a coffee and book sale to provide school supplies for children in Joplin who have lost everything (Joplin Schools Tornado Relief fund).

The help that is needed in Joplin is often physically demanding and heart-wrenching. We moved a destitute family into a new mobile home provided by the Federal Emergency Management Agency and unloaded truckloads of desks, chairs and supplies into the community’s newly reopened elementary school. We stacked cinder blocks on ruined home sites, broke down crumbled roofs and secured family mementos from the wreckage. Rural areas around Joplin were also hit, and though the tornado was even-handed in its wrath, it is clear that those who were poor before the storm have continued to suffer the most.

The community of mutual aid found in disaster relief work provides a shared sense of purpose, something that can atrophy in the isolation of our daily lives. It is the profound change that comes through service that we are determined to continue within our own community in the effort to help first responders and victims of the wildfires in the Austin area that have destroyed nearly 1,400 homes in Bastrop alone. It is our hope that other University of Texas students and faculty will volunteer their time towards the recovery of Central Texas communities ravaged by recent wildfires and come upon the same truth in the ashes that we were fortunate to have discovered in Joplin: In helping to restore others, we restore ourselves. — Robbie Spears, Clayton Travis, MSSW Students; Social Justice Action Coalition members.