Social work senior Chelsea Jones received an Honorable Mention from the Texas Student Research Showdown for her video, “The emergence of community-based literature as a result of police misconduct in African American communities.” (watch the video here). 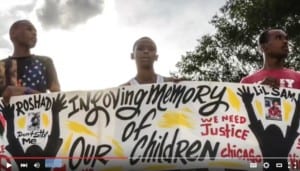 The video summarizes Jones’s research project for the McNair Scholars Program. Under this program, first-generation college students at UT Austin obtain a faculty mentor and work on an independent research project. Jones received mentorship from social work professor Terrence Allen for her project, which explores the discrepancies in and lack of accurate official data on police misconduct towards African Americans. She found that, owing to distrust towards official data, communities have begun to crowd source information on police shootings to create their own, grassroots datasources.

“Through these extensive databases, communities can send a strong message to government officials that citizens no longer wait on the government to meet their needs for social justice, or to communicate the truth. Instead, they will find ways to do it for themselves,” Jones said.

“It was a pleasure working with Chelsea, she is a motivated self starter who is interested in understanding critical social issues that impact the quality of life of people living in urban communities,” Allen said. “Today, there is no social issue more salient than the use of force against unarmed Black citizens. In the future I fully expect for her to pursue this and/or other areas of social significance as a scholar.”

Jones will be presenting her findings in a poster format at the upcoming Annual Biomedical Research Conference for Minority Students in Seattle, Washington.

The Texas Student Research Showdown is a video and presentation competition for undergraduate researchers at The University of Texas at Austin. In the first round, students create two-minute videos about their research, which are voted on by UT students. In the final round, the top six students give six-minute research presentations to a live audience and judging panel. Winners receive up to $1,500 in scholarships to recognize their excellence in research communication.