When Lauren White began her first semester as a master’s student in the School of Social Work last fall, she was already committed to the school’s core values: to provide leadership to enhance social and economic justice, alleviate critical social problems and enhance human well-being. So when her own experience within the school revealed a fundamental problem, she immediately began working on a solution that aligned with the social work mission.

“I had a personal experience based on my own gender presentation,” said White. “There are two gender-neutral restrooms in the School of Social Work building. They are both virtually impossible to find.”

White met with two other master’s students who shared similar concerns, Shana Rubenstein and Shoko Morikawa, and they quickly developed a multi-stage solution.

First, they publicized the issue with educational handouts, maps and flyers. To highlight the difficulty of finding a gender-neutral restroom in the School of Social Work building, the group organized a scavenger hunt game in which students competed to locate the two existing single-stall facilities.

The group is currently working toward a second stage of their plan, which would establish a gender-neutral multi-stall restroom.

In an effort to garner support for the project, the three students connected with the Social Justice Action Coalition (SJAC), a student group at the School of Social Work committed to educating the community about social justice issues. With SJAC’s help, they spread awareness for gender-neutrality as a social justice issue on social media.

“It was with SJAC’s support in publishing the events and providing volunteers that we were able to do those things,” said Rubenstein. “From there on out, we communicated with them and they provided financial support.” 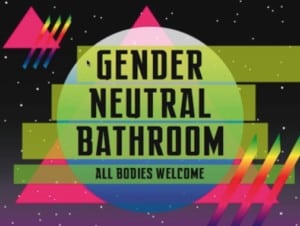 White, Rubenstein and Morikawa also communicated with faculty and staff members, students and alumni through a series of online surveys and meetings with members of the School of Social Work administration.

“Social justice is such a core component of the mission of social work in general. A lot of people who took the surveys talked about the school being a leader in inclusion and diverse needs,” said Rubenstein.

The students met with Luis Zayas, the Dean of the School of Social Work, who said he has worked closely with SJAC over the past several years. Zayas said the social work program is meant to prepare students to tackle tough issues in the face of injustice.

“We teach students to take not even the dean’s word as final. We teach them not to lose hope. They have to persevere,” said Zayas. “Some of that can be taught, but some of that comes with a person’s belief and passion for what they’re doing.”

While the group was busy working passionately at the campus-level, gender-neutral restrooms were being discussed in the Texas Legislature.

Such legislation includes HB 1747, which sought to expand the legal definition of “disorderly conduct” to criminalize individuals for entering a restroom that conflicted with their biological sex. Similarly, HB 2801, called for a strict separation of bathrooms based on chromosomal makeup. At the national level, however, President Obama announced the opening of the White House’s first gender-neutral restroom in April. 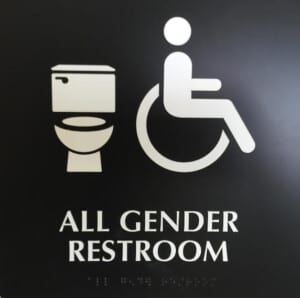 After meeting with the dean, the students set out to investigate current policies surrounding gender-neutral restrooms on the UT Austin campus.

“We’re trying to learn a bit about what barriers other people have experienced while trying to implement gender-neutral bathrooms of different types,” said Rubenstein. “It adds to the urgency and opportunity to have the school take on a leadership role.”

As a result of the group’s efforts, there is a new gender-neutral placard displayed outside of the accessible restroom on the third floor of the School of Social Work building. While Rubenstein says the movement has a long way to go, she also says she is proud of what the group has accomplished so far.

“Even if we’re standing at graduation without the multi-stall gender-neutral restrooms we hoped for, with all of the awareness we’ve raised, it’s not a complete failure.”

Dean Zayas said that the group of students did their due diligence in investigating an issue important to them, building a case to present to their community and creating a plan of action to answer the problem of injustice.

Over the past year, the group has applied the core values of the School of Social Work to everyday life, a translation of social work theory into practice.

“An important part of this is an educational component,” said White. “I hope that throughout this campaign, people have learned about the needs of trans* and gender non-conforming folks.”

Currently, there are over 40 gender-neutral restrooms spread across more than 20 buildings at UT Austin. White, Rubenstein and Morikawa will speak out about their work at the Texas Transgender Non-Discrimination Summit in Dallas at the end of July.