Dr. Namkee Choi, the Louis and Ann Wolens Centennial Chair in Gerontology at The University of Texas at Austin School of Social Work, decided to tackle this problem by bringing psychotherapy to older adults’ homes through Skype.

“We have this wonderful and free videoconference technology,” Choi said. “I thought that we could easily put it into older adults’ hands so that they could participate in treatment in the privacy and comfort of their own homes.”

Choi applied for a grant from the National Institute of Mental Health (NIMH) and, in 2009, she was awarded a $680,000 grant for a 3-year project. The purpose of the grant was to test the feasibility and efficacy of telehealth Problem-Solving Therapy (tele-PST) compared to in-person PST and telephone support calls for depressed, low-income homebound older adults.

In addition to NIMH funding, Choi received funding from the St. David’s Foundation and the Roy F. and Joann Cole Mitte Foundation that allowed her to include more participants in the study.

Findings show that participants liked PST itself, with the tele-PST group reporting higher acceptability of the treatment than the in-person PST group. Results also show a significant reduction in depression symptoms.

The biggest bonus of tele-PST was the technology itself, or what Choi calls the “cool” factor, as this comment from an 84-year old participant shows:

“I was very excited about receiving the computer and learning to use it. This was very new to me, and I am proud of myself. The computer therapy gave me confidence to try new things, and I was able to text my granddaughter back when she sent me a text message! … I feel empowered from the therapy and am able to repeat the PST steps and feel very comfortable using them when I encounter a problem.”

Problem-solving therapy (PST), the intervention that Choi selected, is evidence-based and can be delivered in four to six sessions of 30-60 minutes each. 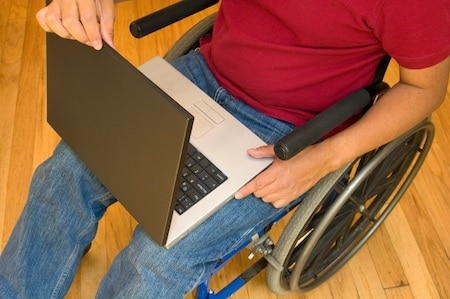 Tele-PST was quite simple and easy to access. Participants were loaned a laptop computer with Skype video call installed and prepaid USB 3G wireless cards. They were also provided with a headset, so their conversation could be more private. Sessions began with the therapist making a phone call to the participant to ask him or her to turn on the computer, so that the tele-PST session could start. When all six tele-PST sessions were completed, the laptop computers were moved to the next group of participants.

Participants in the study were recruited through referrals from case managers of aging-service agencies serving low-income, disabled older adults in Central Texas. In her calls with prospective participants, Choi saw that the use of technology could be a barrier.

“When I explained that they would randomly be assigned to one of the three interventions—tele-PST, in-person PST, or telephone support—most of the them said they hoped it was the in-person PST,” Choi recalled.

But that initial resistance was overcome pretty quickly, and almost all of tele-PST participants loved tele-delivery. The study had a total of 214 participants, ranging in age from 50 to over 80 years old.

Choi found great courage in the words of  participants.

“About 90 percent of them said that this was a life changing experience for them,” said Choi. “Some people cried as they talked about how much they’ve changed and how PST helped them get out of depression.”

The project also strengthened the university-community link as the participant feedback reached case managers and service providers at the agencies through which recruitment was done.

“They initially were hesitant when I approached them about collaborating with the university on this project,” Choi explained. “But they’ve changed. They now want the project to continue.”

Choi’s next step is a logical one. She is planning to apply for funding to embed tele-PST therapists in aging-service agencies for increased effectiveness, efficiency, and acceptability. That approach can make a major difference on how many people can be exposed to and thus benefit from tele-PST.

“It would be much more effective and efficient,” Choi explained. “Effective because the PST therapist will work directly with the case managers who know a lot more about the individual clients. It would be more acceptable to older adults, because they tend to trust their aging-service providers, and we’ll have more success in terms of the recruitment and the retention of participants.”