Skip to content
Home » Research » Reaching across the discipline gap

Jelena Todic and Laura Brown believe that theirs is a “match from heaven.”

Todic, a social work doctoral student with bright-red frame glasses and matching lipstick, and Brown, a composed assistant professor in the department of communication at Western Kentucky University, met in 2014 through the Moody College’s Health Communication Scholars Program. This program trains graduate students from different disciplines to work collaboratively and secure funding for their research project.

Brown, who in 2014 was an advanced doctoral candidate at Moody College, explains that to get started, interested students post their profiles on the program website, and “look for a match.” 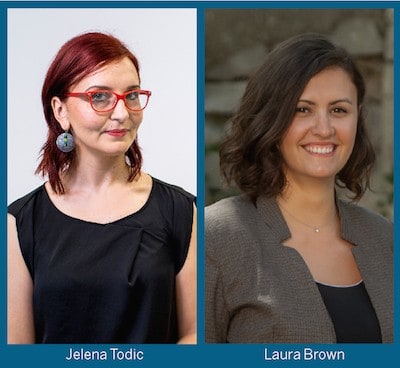 Brown and Todic quickly found each other, as theirs were the only profiles that included, under research interests, the trio of LGBTQ populations, health disparities, and communication.

“We both hit all the checkmarks!” Brown jokes.

Their project, one of only four to receive funding in 2014, focused on the disclosure of sexual orientation and gender identity in healthcare settings by Lesbian, Gay, Bisexual, Transgender, Queer and Questioning (LGBTQ) individuals.

“From a health equity perspective, it is important that healthcare providers have this information because evidence suggests that LGBTQ individuals may be at high risk for heart disease, some cancers, depression, and suicide. But on the other hand, LGBTQ patients might not want to disclose because they are concerned about judgment, discrimination, and ultimately poor quality care,” Todic explains.

The expert opinions of advocates, researchers, and healthcare providers have so far dominated the discussion on this subject and the existing recommendations on best practices. Through their project, Todic and Brown wanted to bring in the voices of LGBTQ patients.

In June 2016 they completed surveys and interviews with 300 LGBTQ patients across the country.

“So far, from our preliminary analysis, the most surprising finding is that most of the participants want to disclose to their primary care providers, but about one third of our interviewees didn’t want information about their sexual orientation and gender identity recorded,” Brown says.

Todic adds that fewer participants want to disclose in emergency or inpatient settings, and the vast majority of participants (93 percent) thought that administrative personnel like registrars should not be asking for information related to gender identity and sexual orientation.

“This is very important because it goes against what current best practices recommend,” she says. “Collecting demographic data is important for eliminating healthcare disparities, but how we go about that process and how we engage LGBTQ patients in it is as important as the final goal. If we dismiss these fears and concerns, we undermine our equity efforts.”

For Todic and Brown, who conducted the one-on-one interviews in person or via Skype, it was intense to hear participants talk about experiences of disclosing sexual orientation to healthcare providers.

As opposed to direct forms of discrimination such as denial of service, most participants recalled “micro aggressions” when they disclosed their sexual orientation in a non affirming environment: health practitioner would suddenly treat them coldly, get frazzled, make less eye contact, end the appointment abruptly, or shift the conversation to sexual behaviors that were not relevant to the consultation.

Brown says that, as participants recalled these incidents during the interview process, many re-experienced the bodily sensations of shame, fear, or anxiety—such as sweating or shaky hands—that they had felt in the moment with their doctors or healthcare practitioners.

“It is important to know that these micro aggressions, which we may minimize, registered in such a deep way as to generate bodily sensations, sometimes many years after the fact,” Todic explains. “This qualitative data gives us some insight into how oppressive structures get under our skin, and ultimately contribute to poor outcomes and health inequities.”

Todic and Brown plan to complete another round of interviews with transgender participants, because many interviewees shared that their transgender friends experienced more direct forms of discrimination due to their gender identity.

When asked how it was to come from different disciplines and work together, both brighten.

“We talked a lot about our process: how to communicate with each other and with our mentors, what was our timeline, how we wanted to treat deadlines, how we were going to handle conflict… I’ve worked a lot in teams with folks in the communications and health fields, but didn’t have this type of conversation before,” Brown says.

“That is definitely coming from social work practice,” Todic adds. “But we don’t necessarily apply it to social work research and I think we should! We have practice skills to make transdisciplinary teams work really well, and we should use them in research.”

The two plan to keep working together in a future project that, like this one, has an important action component.

“I think the next phase is community-based participatory action research, and an intervention project. We want to improve the level of awareness in the LGBTQ community around health equity issues, and we also want to work with providers to ensure that LGBTQ individuals receive the best possible care,” Todic says.

Brown offers a final reflection on the success of their collaboration:

“I think trans-disciplinary collaboration worked so well for us because we already came with shared values such as commitment to action and social justice. We were already aligned on this, and our professional interests just were superposed onto this common set of values. I’m curious to see how trans-disciplinary collaboration works when these shared values are not there from the beginning.”