AUSTIN, Texas — Balancing a commitment to efficiency with a continued focus on excellence in the classroom and in research is the only way for The University of Texas at Austin to become the best public university in the nation, President Bill Powers said today in his annual State of the University address.

“By any measure, UT is one of the most efficient flagship universities in America,” Powers told students, faculty members, staffers and alumni. “Even so, the world changes, and we need to be out in front of these changes. We can’t just sit back.”

Powers highlighted the university’s “course transformation project” in some classrooms, through which students and professors have begun to use technology more effectively, resulting in higher attendance, better grades and an increased commitment to learning.

“When classes are getting more demanding and yet students are doing better, you know you’re onto something big,” he told the audience at the B. Iden Payne Theatre on campus. “We’re taking these successes and scaling up to include introductory economics, English and psychology classes — affecting more than 10,000 students a year.”

Powers also pointed to the university’s efforts to increase its four-year graduation rate to 70 percent as the most effective way to lower the cost of a degree.

“We should explore other ways to help families cope with the cost of higher education, even by giving them more predictability so they can plan. This is the thrust of Gov. Perry’s ideas of locking tuition rates on a rolling four-year basis,” he said. “Predictability and planning are also important for our campus, so the state should also show its own commitment by providing predictable revenue streams for the same four years.”

The University of Texas at Austin receives less money through tuition and state support than any of its peer public research universities. Yet it is the second most efficient Tier One research university in the nation, graduating more students and employing more professors for every dollar it spends than virtually any other school.

Powers noted that the university’s success is unique in Texas: About 9,000 students earn bachelor’s degrees from UT Austin each year; it graduates more Ph.D.’s than any other American university except the University of California at Berkeley; and the number of students applying for admission continues to rise.

Looking to build on that success, Powers said that the university:

•   is collaborating with other leading universities, think tanks and online education companies to develop new student-centered innovations in the classroom, and

•   has recently won major research grants from the National Science Foundation, including one to develop the next generation of supercomputer and another to establish a nanotechnology research center on campus.

“We are a ‘Moneyball’ campus,” Powers said referring to the book and movie that highlighted an innovative, do-more-with-less approach to excellence. “And we have developed data and management tools to help make the right decisions.” 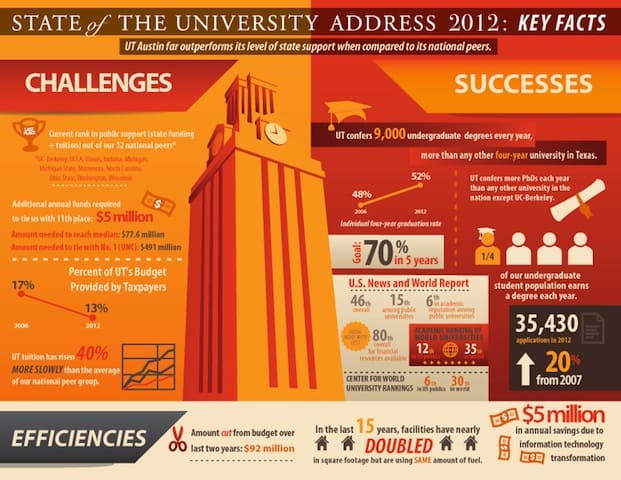