The November 6 election changed the dynamic for immigration reform in the United States.

Within a day, the Speaker of the House said that comprehensive immigration reform is needed, said Mary Giovagnoli, director of the Immigration Policy Center (http://www.immigrationpolicy.org/). Others agreed that it would be a priority for the 113th Congress that convenes in January.

The speaker and other office holders had heard the message sent by the election results, she said. In particular, immigration reform was listed as a priority by Latino voters—70 percent of whom voted for President Barack Obama. But among a range of voters—Latinos, immigrants, women, and young people—the rejection of anti-immigrant policies and leaders is helping to shape new opportunities to achieve immigration reform.

Giovagnoli, who has worked in immigration matters for 15 years, brought her perspective on the fast-changing national debate to the Dean Jack Otis Social Problem and Social Policy Lecture at the School of Social Work. The lecture series was endowed by Otis, the dean of the school from 1965-1977. He died in 2010.

Changing the nation’s immigration policies has been stymied in recent years as government leaders have disagreed on how to handle the 12 million undocumented residents in the United States.

The election appears to have broken at least the ice if not the disagreements.

“The election really radically changed things because I think the day of the election people starting changing the tone of the debate on immigration,” she said.

Giovagnoli said it is important that the facts of impact that immigrants have on the United States must be a part of the discussion.

“The information that’s out there clearly shows that immigration and immigrants are net gain for this country,” she said. “No matter how you slice the equation.”

Statistics show that as immigrants put down roots in the U.S., their incomes rise as does home ownership and other indicators of economic and social stability.

Giovagnoli said that some states that are instituting anti-immigrant laws are places that haven’t seen the long-term positive impact of immigrants.

“Sometimes it’s easier to step back nationally and say look this is what’s happening,” she said of positive indicators. “That doesn’t make it easier at the local level but it shows we know there’s a positive outcome.”

Although it’s taken a while, getting people to the table to talk about immigration reform was the easy part, Giovagnoli said.

Now comes the hard work of finding agreement on undocumented residents in the U.S. and on what to do about legal immigration.

“But starting with undocumented workers and working our way out from there is a great opportunity to really get at more problems,” she said. “It would not only help tremendous numbers of people but our economy as a whole.”

She urged members of the audience to let their representatives know that immigration reform is important.

“You have an opportunity in the work you do every day to start being a chronicler of why we need reform and why we need change,” she said. “Look for, find opportunities, find ways to try make a difference because the work you’re doing is critical. But if people [elected officials] don’t know why immigration reform would matter to their constituency they’re not going to do anything about it.” 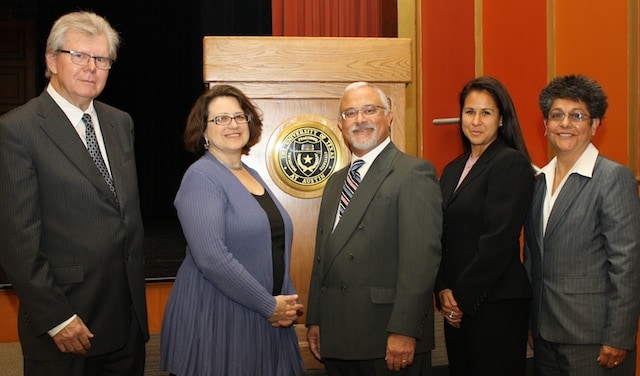