AUSTIN, Texas — There are more than 300,000 victims of human trafficking in Texas, including almost 79,000 minors and youth victims of sex trafficking and nearly 234,000 adult victims of labor trafficking, according to a groundbreaking study by the Institute on Domestic Violence & Sexual Assault (IDVSA) at The University of Texas at Austin School of Social Work. 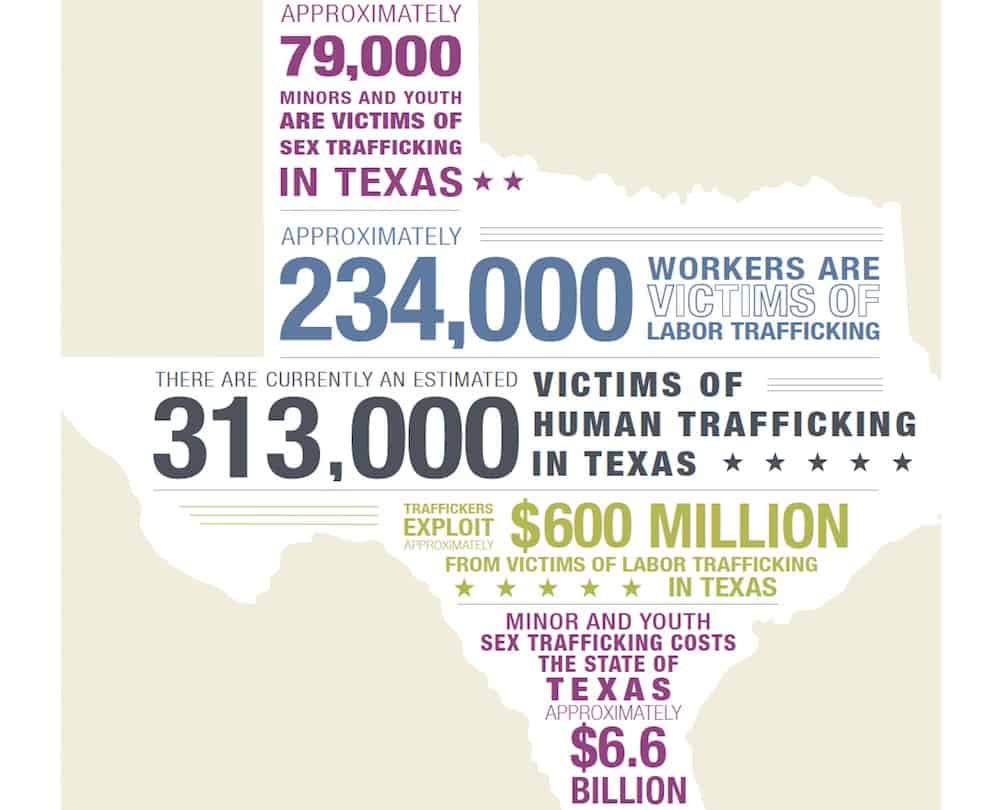 Human trafficking happens when one person is controlled through violence, deception or coercion in situations of commercial sex, forced labor, or domestic servitude. Although human trafficking is known to be prevalent in large states with big urban centers such as Texas, the scope of the crime has been difficult to measure. Existing data sets, which focus almost exclusively on identified victims, have shed light on only a fraction of the problem.

To address this gap, in 2014 researchers launched the Statewide Human Trafficking Mapping Project of Texas with the goal of quantifying the prevalence and economic impact of human trafficking across the state. This statewide research was a collaboration among IDVSA, the Bureau of Business Research at the IC2 Institute at UT Austin, and Allies Against Slavery, with funding support from the Criminal Justice Division at the Texas Office of the Governor.

“This is our first glimpse into the scope and impact of human trafficking in Texas. Few states have this kind of insight into the number of people being exploited,” said IDVSA director Noël Busch-Armendariz, who led the study. “And more importantly, each count reflects a human being living among us in slavery-like conditions. Our findings certainly give us all a call to action.”

In addition to mining existing databases, researchers looked at risk indicators found in documented trafficking cases and used that information to define groups of people — community segments — considered to be at higher-than-average risk of trafficking. Some examples of these community segments are homeless individuals, children and youths in the foster care system, and migrant workers.

“The economic and social costs of human trafficking in Texas emphasize the importance of preventative solutions and help inform how to prioritize resources to support those who have experienced exploitation,” explained Bruce Kellison, director of the Bureau of Business Research.

“This is a watershed study for our state,” said John Nehme, the president and CEO of Allies Against Slavery. “This research helps bring human trafficking out of the shadows: the men, women and children who are victims of trafficking in Texas are no longer invisible. The report will be a significant resource for policymakers, professionals, survivor leaders and community members as we continue to work together to end human trafficking.”