Recent reports of yet another round of Texans falling ill and requiring hospitalization after taking K-2 is a sign we can do a better job educating and eradicating these dangerous chemicals. 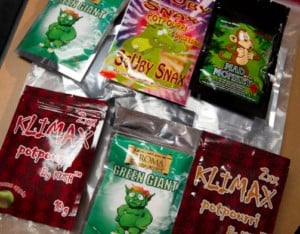 K-2 and Spice are made-up names for chemical substances that attempt to mimic the effects of tetrahydrocannabinol, or THC, the active ingredient in marijuana.

Pharmaceutical companies and university laboratories began researching how to produce synthetic THC in the 1980s to treat pain, inflammation, and nerve-cell disease without producing marijuana-like intoxication. The research, however, got hijacked by drug dealers who were trying to produce new versions of street drugs known as “herbal incense.”

To produce these street drugs, industrial chemicals often from China are mixed in experimental portions and sprayed on dried plant material suitable for smoking. The result is packaged in colorful foil baggies that can be purchased empty online, filled with the mix, and sold under different brands of herbal incense for about $5.

The first time we saw this appearing in Texas was in 2009, and by November of 2016 forensic laboratories had identified 35 different varieties of synthetic THC on the streets in Texas. Names and chemical variations keep changing. Each time a new combination hits the streets, it may generate a spike in the number of overdoses—as we saw this past spring and early summer in Austin, and we are now seeing again across the state.

Between Jan. 2010 and Nov. 2016, Texas poison control centers have reported handling 3,775 synthetic cannabinoid exposure calls. Of these cases, 78 percent were male users, and 44 percent were users under the age of 20. More than one-third of the patients reported tachycardia, and about 10 percent suffered a life-threatening effect or a significant residual disability. Six people have died.

The problem goes of of course beyond Texas. The New England Journal of Medicine is now reporting about one new synthetic cannabinoid that is 85 times more potent than THC and produces “zombielike” behavior.

It’s clear we need to do more. But what should be done?

In 2015 the federal Controlled Substances Act and a similar Texas law added additional varieties of synthetic THC to the penalty groups. Unfortunately, this addition does not seem to have had the desired effect to lower the number of calls due to use of the drug. In addition, because rogue chemists are constantly changing their formulas and issuing new varieties of synthetic THC, they can stay one step ahead of the law.

Prohibition of the manufacture of these chemicals in China would obviously make a significant difference, but that won’t happen anytime soon.

In the meantime, we will continue to see abuse of these $5 drugs among the homeless population, and among young people who do not know they are at risk when they use them.

That is why we need to educate all about what synthetic THC was originally meant for, how drug-dealers hijacked the research, how crudely these drugs are produced, and the potential they have for serious harm and death—despite being marketed as “safe” and “legal” alternatives to marijuana.

High school chemistry and science teachers should discuss these drugs in the classroom, getting facts and solid information to our youths, who need to understand the dangers in taking drugs with their constantly changing composition and effects. Families should be knowledgeable about these drugs and discuss them around the dinner table, making clear that these are valid warnings as opposed to urban legends about the dangers of “mystery drugs.”

Equally or even more important, emergency medical service personnel and staff working with homeless and marginalized populations should know that these drugs may produce serious risks to users — 95 percent of the cases logged by the poison centers had to be managed in health care facilities — but also to the individuals around them. Users may not just get “stoned” and “chill out” but suffer serious reactions that may include violent behaviors.

Jane Maxwell is research professor in the School of Social Work at The University of Texas at Austin.

This opinion piece was produced for Texas Perspectives and represents the views of the author, not of The University of Texas at Austin or the Steve Hicks School of Social WorkA version of this opinion piece appeared in the Forth Worth Start Telegram and the Corpus Christi Caller.