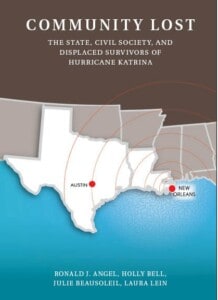 The School of Social Work will host a Hurricane Katrina remembrance on Monday, September 24, from 3:00-5:00 p.m. in the UTOPIA Theatre, UT Austin School of Social Work, 1925 San Jacinto Blvd., with a talk about the book “Community Lost:  The State, Civil Society, and Displaced Survivors of Hurricane Katrina” by two of the authors, Ron Angel and Holly Bell, and a panel discussion with survivors and service providers. The event is free and open to the public. Space is limited. RSVP requested: ssw-profdev@utlists.utexas.edu

In the current political debate about the role of big government, a new book by University of Texas researchers documents the complimentary roles of the federal government and “civil society” organizations, such as local government, businesses, private charities, churches and individual citizens in the long-term recovery of displaced survivors of Hurricane Katrina.

The book, “Community Lost:  The State, Civil Society, and Displaced Survivors of Hurricane Katrina” by Ronald J. Angel, Holly Bell, Julie Beausoleil, and Laura Lein documents the struggles of survivors displaced to Austin to recover and the Austin community to help them.

Over the Labor Day weekend in 2005, approximately 10,000 residents of the Gulf Coast evacuated to Austin, fleeing the floodwaters of Hurricane Katrina. Many Austinites, after watching the horrific TV footage of survivors stranded on rooftops and in the New Orleans Superdome, opened their hearts, homes, and pocketbooks to help survivors. They overwhelmed the Red Cross with donations and applications to volunteer at the convention center, the major shelter for Katrina survivors.

While there have been scores of books written about the early recovery, “Community Lost” is one of the few to focus on the long term recovery of those displaced.

The book is the result of a project funded by the National Science Foundation. Led by Dr. Ronald J. Angel of the Department of Sociology and Dr. Laura Lein, formerly of the School of Social Work and now Dean of the School of Social Work at the University of Michigan, the team of researchers and graduate students in social work, anthropology and sociology conducted participant observations in the shelter and in various social service organizations and public meetings. They also interviewed over 70 survivors and nearly 100 service providers over the course of two years.

What happened to Katrina survivors?

The researchers note that it is notoriously hard to say what happened to the vast numbers of Katrina survivors who evacuated from New Orleans. There is no established way to document where survivors settled.  However, the 2010 U.S. Census found that New Orleans lost 29% of its population from 2000, the African American population lowered from 67% to 60% and the Latino population increased 57%.

Today, fewer than a quarter of the city’s 4,200 public housing units destroyed by Katrina have been rebuilt and rental housing is unaffordable, with 60% of the city’s renters paying more than 30% of their pre-tax income on rent and utilities, up from 51% in 2004. The percent of New Orleans residents without a car fell from 27% to 19% and there has been a 5% increase in adults age 25 and older with a college degree (up from 26% in 2000 to 33% in 2010).  Low income, African American residents found it harder to return to New Orleans; the population is now smaller, with more white and more affluent residents.

However, the researchers documented some of the factors that made it easier or harder for Katrina survivors to recover. They looked at survivors’ social capital, or relationship ties, as well as the relative roles of the federal government and civil society, non-governmental actors such as non-profits, businesses, charitable organizations, churches and individual volunteers in the recovery.

What made the difference?

The researchers found that civil society was critical to survival in New Orleans and in Austin. However, the civil society response was effective primarily for short-term needs. On the other hand, the federal response was essential for long-term needs. However, federal assistance, the form of the Federal Emergency Management Agency (FEMA) was delivered in a bureaucratic way that actively hindered long-term recovery.

The research documented the impact of survivors’ social capital, the strength of their social connections and networks, on their ability to recover. Many low-income residents of New Orleans survived on the strength of “bonding” ties:  tight, condensed social networks. They might live with family, work part time with a cousin or “auntie,” and rely on sharing resources with extended long-term networks to make it through times with few financial resources. These tight, reciprocal networks made it possible for them to survive in New Orleans.

However, during the storm and evacuation, many of these networks were disrupted, sometimes forcibly. Survivors arrived in Austin without their most valuable resource:  their connections. Further, they arrived in Austin, a city where most residents came from somewhere else and where a different kind of social capital, namely education, job training, and formal work experience, were more valued than their prior social connections. Many of these low-income survivors found it hard to recreate a sense of community in their new homes, and because of the slow rebuilding of New Orleans, were left in a semi-permanent limbo, made worse by the actions of FEMA.

More affluent survivors relied on “bridging” ties — networks, such as friends, family, and work connection outside New Orleans that provided them with more connections to Austin. They also often had more education, work experience and financial resources, making them less dependent on FEMA and other public resources.

The difference social capital makes is illustrated by two participants interviewed by the research team. Ted Johnson, an African American male, and his wife were both employed in the health care industry in New Orleans before Katrina. They and their two children evacuated New Orleans in their car before Hurricane Katrina struck to stay with family member in Austin. The family received help from FEMA, but in the end it was their relatives and their own resources that enabled the Johnson family to restart their lives in a new city. An old friend of Ted’s helped him find a job. Both Ted Johnson and his wife found heath service jobs and eventually sold their home in New Orleans and bought a house in Austin. The combination of transferable skills, resources, and family connections contributed to this family’s successful relocation to Austin.

On the other hand, Louise Wilkins, an unmarried 41-year-old African American female, lived with three school-aged children and an adult daughter in a housing project in New Orleans. Louise’s medical problems had made it hard for her to work and she received social security. Her daughter also worked. Louise and her children did not evacuate before the storm, and stayed in their apartment. As the water rose, though, they walked to the New Orleans Convention Center with nothing but their clothes. When they were evacuated from the convention center, they had no idea where they were going. They lost contact with extended family members and friends during the evacuation. The family eventually arrived in Austin, where they knew no one.  Louise had positive things to say about their reception at the Austin Convention Center:

The family stayed at the convention center for three weeks and then settled into an apartment, paid for by FEMA assistance. Then an old friend, Mary Powers, who had lived near them in the housing project, joined them. Mary and her family spent four or five months in a hotel in Houston, in a destitute situation, until Louise located them.  Unfortunately, Louise and Mary did not fare as well as the Johnsons. They found it hard to maintain employment because of a lack of transportation and identification, as well as family and health problems. Mary eventually lost custody of her infant due to substance abuse problems. Louise’s oldest daughter discovered that she was HIV positive, her son dropped out of school, and she became depressed. At the time of our final interview in April 2008, Louise had been diagnosed with cancer and died later that year.

The City of Austin provided enormous support to survivors:  the research team documented over $5 million donated from private sources. The Red Cross distributed over $12 million after Katrina and Rita. Thousands of citizens volunteered and donated clothing, beds, and other goods. The city itself coordinated with FEMA to provide longer term housing. However, cultural differences between the providers and the survivors made it hard to engage survivors in case management. Further, local non-profits established a case management collaboration to provide ongoing case management support. However, many low-income survivors, used to sharing resources with family and extended networks, were unused to the idea of “self-sufficiency” promoted by these programs. Case management could not provide long-term housing, transportation, employment/income or identification. There was a mismatch between survivors’ skills and the Austin job market, and the lack of affordable housing in Austin kept many survivors worried about how they would survive when their FEMA benefits expired.

The Federal Response to Katrina

On the other hand, FEMA provided critical resources for shelter, short term assistance and longer term housing.  According to a 2009 Senate report, FEMA had provided $2.3 billion in expedited assistance to 1.1 million applicants; $6 billion for 1.5 million applicants for emergency shelter; $7.4 billion for 1.4 million applications for individual assistance; $2.7 billion for mobile homes; as well as funded much of the case management program. However, as one local social service provider remarked, “FEMA is its own monster.” FEMA’s sluggish and bureaucratic response, constantly changing rules and deadlines and poor communication with the city and with individuals created even more stress for survivors, apartment landlords, and non-profit advocates as they wondered from month to month if resources for housing would continue to be available.

In the current political debates, “big government” is seen as either a savior or the devil. In the example of Hurricane Katrina, we see that only big government has the resources to provide immediate assistance and to organize local response. However, in FEMA, we also see a caricature of “big government”:  wasteful, ineffective, and bureaucratic to the point of being inhumane. However, it doesn’t have to be this way. Good government requires thoughtful, forward-looking and realistic planning, in particular, planning for the people who are most likely to be impacted by a natural disaster:  low-income people, people with disabilities and people of color. Congress made a number of suggestions for improving FEMA in the Post-Katrina Emergency Management Reform Act of 2006 (PKEMRA). While not all have them have been implemented, there have been improvements.

In sum, this research suggests that a vibrant and effective civil society requires a stable, powerful, efficient, and just state to function effectively. Hurricane Katrina illustrates the inherent problems when the federal role in providing safety net functions is drastically cut and the belief that all social problems can be addressed at the local level. Federal response to disaster must be adequately funded and staffed and designed to attend to the needs of those who are in greatest need. Further, adequate disaster preparedness requires a long-term federal commitment to addressing structural inequalities that make people vulnerable.