Skip to content
Home » News » LBJ and the school beginnings

Fifty years ago this January, President Lyndon B. Johnson declared an “unconditional war on poverty” during his first State of the Union address. This declaration is considered a turning point in Johnson’s presidency and in United States history 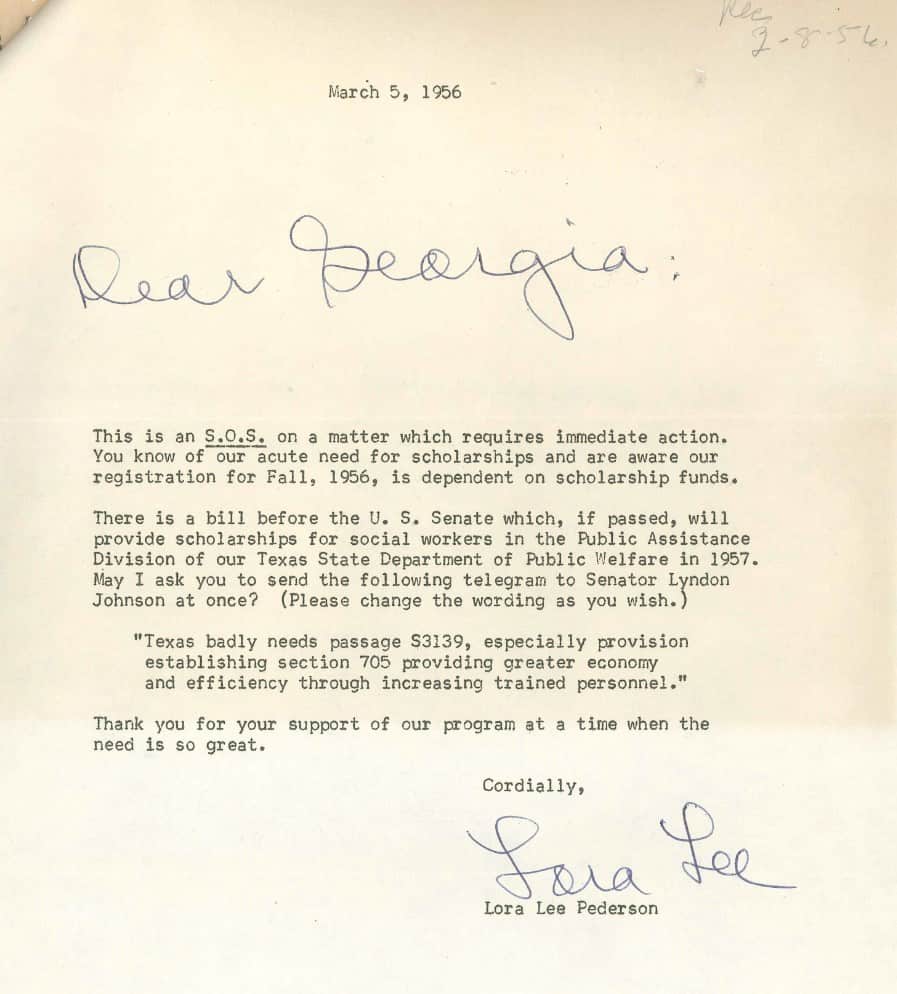 Prior to his presidential declaration, in his home state of Texas, Johnson had already demonstrated a willingness to improve the lives of the less fortunate. In 1956, as a United States Senator, Johnson supported Social Security amendments to increase federal funding for grants to assist the training of social work personnel at the state level.

A major supporter of these amendments was Lora Lee Pederson, the director of the recently created School of Social Work at The University of Texas at Austin. In 1956, Pederson mounted a campaign to urge Johnson to support the bill, indicating that student registration for that year was dependent on scholarship funds. Johnson graciously responded to all School supporters, thanking them for their input and assuring them that he would bring their views to the Senate Finance Committee.

The School had officially opened in 1950, after a few failed attempts at the legislature to approve funds for the establishment of a graduate school to train social workers. Some legislators, and many Texans, viewed social welfare initiatives of any kind as dangerously close to communism and socialism. A 1950 article in the Herald-Press Palestine, for example, warned that the recently created graduate school needed “close supervision to prevent it becoming a training center for Socialism.” “Social service is admirable and needed,” the article went on, “as long as it is kept on the basis of conscience, either of the individual or the community… [it] becomes dangerous when it is approached from the idea of government responsibility.”

Despite the difficult beginnings, by 1956, when Pederson mounted the campaign in favor of federal scholarship funds, the School was flourishing. It had already been accredited by the American Association of Schools of Social Work, and had graduated many highly trained social workers needed in the expanding social welfare agencies throughout the state. In 1960, in fact, the Austin American-Statesman reported that School graduates had been “eagerly sought after for professional work.”

Pederson’s zeal to find sources of funding for social work students was also giving fruit.  And, in true Texas self-reliant spirit, not all those funds were coming from the government. In 1960, School alumni launched a fundraising campaign and presented Pederson with a check for $1,000 for the establishment of the Lora Lee Pederson Scholarship Fund. Pederson’s legacy continues today, as this fund still supports excellence in social work education at the School.