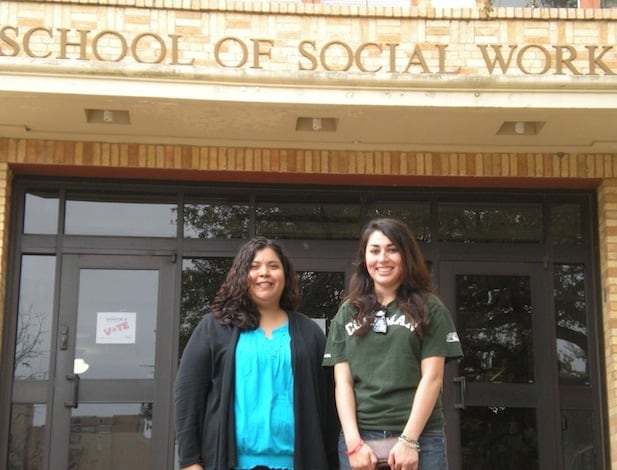 AUSTIN, Texas – The University of Texas at Austin graduate students Ana Coronado and Lina Palomares have been awarded scholarships by the Hogg Foundation for Mental Health to support bilingual mental health services in Texas. Both are students in the School of Social Work.

Coronado graduated with a degree in sociology from Emory University in Atlanta. As a Mexican-American, she realizes the importance of providing culturally and linguistically appropriate services to Hispanic populations.

“I want to help the community in which I live by becoming a mental health professional, assisting those who are dealing with a mental health issue, and removing the stigma often associated with mental illness,” Coronado said.

Palomares earned bachelor’s degrees in neuroscience at the University of California, Los Angeles and business administration at California State University, Los Angeles. After graduation, she worked at the UCLA Department of Family Medicine as a research assistant for eight years on studies that examined racial and ethnic health issues and health care disparities. She saw the same obstacle come up over and over: lack of bilingual and bicultural professionals.

“As a bilingual, bicultural Latina, I can be a catalyst for change. After earning my master’s degree, I want to work with underserved populations, specifically Latinos, in mental health. I want to help replace ‘vergüenza,’ ‘miedo’ and ‘desesperación’ with ‘confianza,’ ‘alegría’ and ‘esperanza,’” Palomares said.

Now in its fourth year, the bilingual scholarship program has awarded a total of 109 scholarships since fall 2008 to increase cultural and linguistic diversity in the Texas mental health workforce.

“This innovative scholarship program directly addresses the critical need for a more culturally and linguistically competent mental health workforce,” said Dr. Octavio N. Martinez, Jr., executive director of the Hogg Foundation. “We are excited to infuse the workforce with talented and highly qualified students who have these added skills that are in such high demand now.”

Scholarship recipients receive full tuition and fees. Recipients must be fluent in English and a second language chosen by their graduate program, typically Spanish. They also must commit to working in Texas after graduation providing mental health services for a period equal to the timeframe of the scholarship. Scholarships are available at all 12 Texas graduate schools of social work that are accredited or pending accreditation by the national Council on Social Work Education.

Studies have shown populations of color and those who speak a language other than English are under-represented in social work and mental health professions in Texas. As a result, many people may not have access to mental health services that adequately meet their cultural and linguistic needs.

Language differences can be a huge barrier in providing effective mental health services. Even when language barriers are overcome, subtle nuances such as world view, cultural beliefs, religion, family traditions and cultural norms can sometimes interfere with delivering effective treatment. The scholarships are one of many ways in which the Hogg Foundation is working to increase cultural and linguistic awareness, knowledge and skills among mental health service providers in Texas.

The Hogg Foundation advances recovery and wellness in Texas by funding mental health services, policy analysis, research and public education. The foundation was created in 1940 by the children of former Texas Governor James S. Hogg, and is part of the Division of Diversity and Community Engagement at The University of Texas at Austin.