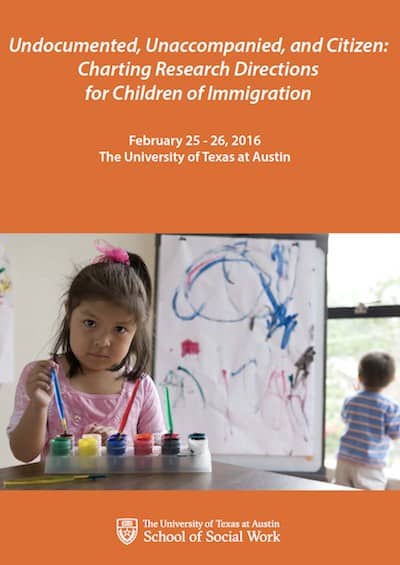 The University of Texas at Austin School of Social Work hosted more than 50 scholars and practitioners from across the country on February 25-26, 2016, to discuss the future of children of immigration.

Immigrants from the Northern Triangle of Central America (El Salvador, Guatemala, and Honduras), including unaccompanied youth, have recently been among the fastest growing group. Unaccompanied child migrant apprehensions are projected to reach about 68,000 during 2016, about the same level seen in 2014.

“Data for the coming months will help clarify whether the trend is downward or upward, and the trend will depend on changing conditions in Central America, Mexico’s immigration enforcement activities, and policies in the United States,” Capps stated.

While protection programs like DAPA (Deferred Action for Parents of Americans and Lawful Permanent Residents) will not apply to the new wave of Central American migrants (families or children), Capps estimated that these families and children will remain in the United States for a long time, even if not granted asylum or other status relief.

Capps also noted that 79 percent of the 5.1 million children with unauthorized parents are U.S. citizens.

Wendy Cervantes, vice president of Immigration and Child Rights for First Focus and director of the Center for the Children of Immigrants, remarked that while important to the well-being of immigrant children, “legal status, in and of itself, is not enough for kids”.

Conference participants discussed the experienced of immigrant children in the child welfare system, an area which unfortunately remains largely unknown, as data are not collected uniformly at the state or national level.

“The characteristics, risk factors, incidence of maltreatment, or service use among children of immigrants who come to the attention of the child welfare system are little understood,” said Alan Dettlaff, dean of the University of Houston Graduate College of Social Work. “While children of immigrants may be underrepresented in the child welfare system, they may be at greater risk of poor outcomes.”

Sociologist Cecilia Menjívar of the University of Kansas discussed how structural violence, symbolic violence, and different forms of gender-based violence impact Central American children on the streets, in their homes, and throughout the migration journey.

Children’s experiences with violence, hardship, and trauma are increasingly recognized by providers. Unfortunately, conference participants agreed that currently available psycho-social measurement instruments do not adequately capture the range of children’s experiences prior to, during, and following migration.

Luis Zayas, dean of the UT Austin School of Social Work and convener of the conference, said he was hopeful that these conversations will contribute toward providing quality care and support to children of immigration by advancing knowledge that will inform the practices, services, and policies addressing the health and wellbeing of this population.

*Funding for the conference “Undocumented, Unaccompanied, and Citizen: Charting Research Directions for Children of Immigration” was made possible (in part) by GRANT #: 1 R13 MD010415-01 from the National Institute on Minority Health and Health Disparities. The views expressed in written conference materials or publications and by speakers and moderators do not necessarily reflect the official policies of the Department of Health and Human Services; nor does mention by trade names, commercial practices, or organizations imply endorsement by the U.S. Government.