The Institute on Domestic Violence & Sexual Assault (IDVSA) at the School of Social Work has recently completed the Resiliency Project, an effort that fills a gap in the child abuse field. Organizations in this field knew that the work affected their staff and volunteers but did not know what they could do to address the symptoms of compassion fatigue, burnout and other stress-related problems.

Through the Resiliency Project, IDVSA developed, implemented and evaluated an organizational resiliency model specifically designed for child abuse professionals. This two-year project started in 2009 with funding and support from the Office for Victims of Crime (OVC), Office of Justice Programs, U.S. Department of Justice.

One of the project’s major training and technical assistance products is an evidence-based, 3-day training curriculum, which identifies strategies that organizations can use to build strengths in child abuse staff and volunteers through policy, supervision and training.

IDVSA has been collaborating with OVC Program Manager Bethany Case and the OVC Training and Technical Assistance Center to shape the original curriculum into a dynamic, blended learning experience that combines webinars and on-site training among other formats. In its 2013 Report to the Nation, OVC announced that it will soon be making the blended learning training available to child abuse organizations nationwide upon request.

The Resiliency Project has been a good fit for IDVSA since it dovetails with two of its operating principles: engaging the field, and bringing research to practitioners.

“We are really honored to have been part of this project and bring this resource to the field,” said Noël Busch-Armendariz, Director of IDVSA, and principal investigator of the Resiliency Project. “Addressing the impact of the work is necessary to sustain those professionals who are working with traumatized or victimized people. Otherwise you have this revolving door, and you never really build the depth of capacity that you need to in those organizations.”

The Project Team at IDVSA started with a nationwide survey and extensive literature review to understand the current state of research and best practices on resiliency. The team then designed an organizational resiliency model around the five core elements identified by the National Victim Assistance Academy (NVAA): self-knowledge and insight, sense of hope, healthy coping, strong relationships, and personal perspective and meaning.

Beginning in September 2010, twelve pilot sites implemented the model for eight months. The pilot sites were children advocacy centers, CASA programs, and child welfare agencies. They represented rural, suburban and highly urban areas including the nation’s capital. Two people from each pilot site were designated as “resiliency coaches,” recognizing that resiliency champions often work in isolation, and a team approach could support their efforts as change agents. 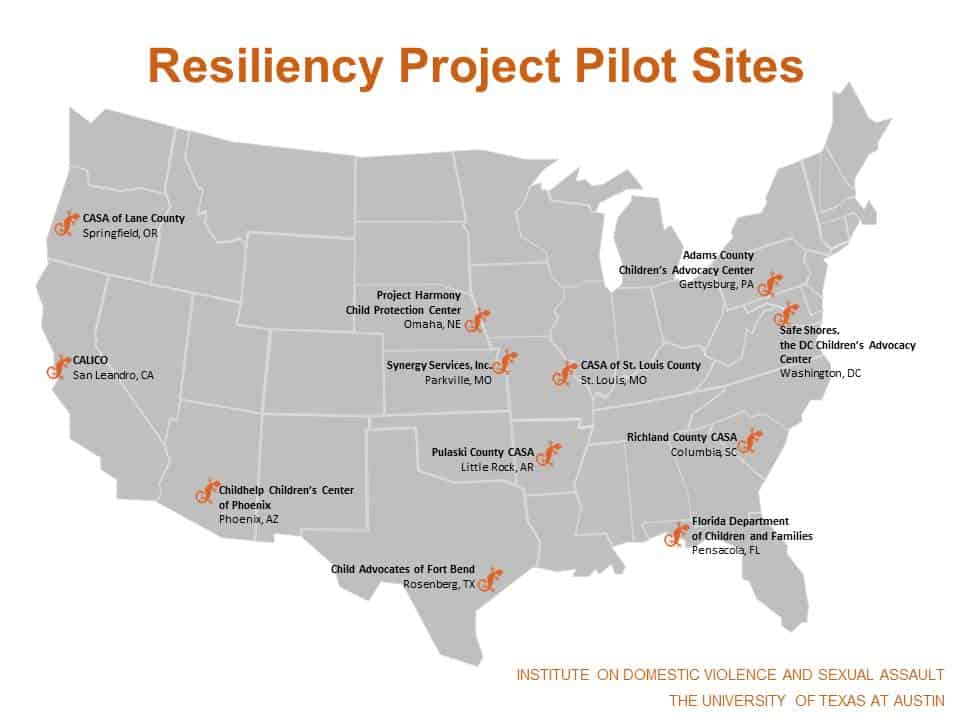 “We called them resiliency coaches because it was going to be their job to come to the training, learn what the model is, learn how to implement it, and then go back into their agency and be resiliency coaches,” explained Karen Kalergis, Project Director, and Associate Director for Education and Communications at IDVSA.

“We had end users involved in developing all of the products from A-Z,” said Kalergis. “The resiliency coaches tried out our research-based strategies, and then they also took what they learned about our program model of the five core elements, and invented some of their own. All of the material we provided OVC comes from people who are in the trenches. Now the efforts and experiences of those end users are available in the blended learning curriculum for other child abuse professionals.”

Findings from the pilot phase show that 80% of the resiliency coaches found training and technical assistance useful, 95% believed it is highly likely the program will continue and said turnover would have been greater without the efforts from the pilot program.

In addition to the curriculum, the main other product of the pilot phase was the Gecko Guide – a Handbook for Child Abuse Managers (pdf). This booklet captures the lessons learned from the 12 pilot sites as they implemented the organizational resiliency model.

Why the gecko? Kalergis explained that research for this project took the team to western and eastern, traditional and spiritual sources for resiliency. The team discovered that in the Mayan totem, the gecko is a symbol of intuition. The gecko recognizes when it may be in trouble and takes steps to address the danger, from camouflaging itself to re-growing a lost tail. The Resiliency Project encouraged organizations to be geckos and use their intuition and ability to change to protect their own well-being as well as that of their colleagues. The gecko became a symbol of the project, and the resiliency coaches were often referred to as geckos or gecko pilots.

To receive updates about the availability of the blended learning training “Building Resiliency in Child Abuse Organizations,” email training@ovcttac.org to be added to the mailing list.