A unique collaboration between The University of Texas System Police and social work researchers at UT Austin has produced a science-based, victim-centered blueprint for law enforcement to respond to sexual assault cases at all 14 UT institutions.

It likely is the first time a university system police department has implemented sexual assault response training and protocols based on scientific research by a major university. 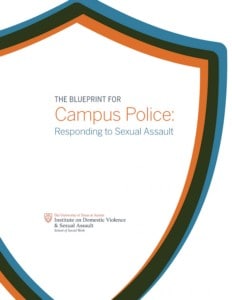 The Blueprint for Campus Police: Responding to Sexual Assault – developed by UT System Police and the Institute on Domestic Violence & Sexual Assault at UT Austin’s School of Social Work – is a 170-page document based on the integration of science, philosophy and protocols. It provides the UT System’s 600 sworn campus police officers with guidance to better engage with and understand victims as well as improve the handling of campus sexual assault cases from the initial report until the conclusion.

UT System police are responsible for 14 academic and health institutions with more than 300,000 students, faculty and staff.

“Having the opportunity to rely directly on the scientific and academic community to inform police practices is a rare and powerful foundation for action,” UT System Police Director Michael Heidingsfield said. “We must publicly acknowledge our moral obligation to understand sexual assault for the life-altering and destructive experience it is, and be champions of those victimized.”

The Blueprint was developed in support of the White House Task Force to Protect Students from Sexual Assault and its call to researchers to find new solutions to respond to this problem.

The Blueprint will guide law enforcement officers in their ability to seek truth and justice while minimizing unintended consequences for victims, Heidingsfield said. It was based on research that suggests non-stranger sexual assault is one of the most prevalent violent crimes and that campus police have the opportunity to become experts and lead the way with innovative strategies.

The manual provides police with science and translation tools, and answers to some of the most compelling and confusing issues about sexual assault such as: the neurobiology of trauma; the role of drugs and alcohol; false allegations; forensic interviewing; and the intersection of sexual assault, dating, domestic violence and intimate partner violence.

Specifically, the Blueprint teaches police to:

“The Blueprint is proof that science can and should inform police practice,” said chief author, Noël Busch-Armendariz, director of the Institute on Domestic Violence & Sexual Assault and UT Austin School of Social Work professor. “It’s not simply about procedural changes — although policies are critical to the solution — the Blueprint is also about shifting the culture in law enforcement’s approach to sexual assault.”

About 23 percent of female college students are victims of sexual assault, although the actual number reported to law enforcement is much lower.

There are many reasons for the gap. But campus police are especially concerned about two: historically in the investigation of sexual assaults, victims have encountered unwarranted skepticism from law enforcement; and law enforcement has relied on standard investigative protocols to respond to victims of sexual assault, which can ignore the uniquely destructive characteristics of this offense.

“We must listen to victims’ voices and understand their fears and concerns in the context of current science as well as ensure that our policies and protocols are evolutionary and not stalled in the past,” Heidingsfield said.

UT System police have already begun using the Blueprint to train their officers and investigators. It has the potential, Heidingsfield said, to be a national model for not only university law enforcement agencies but law enforcement in general.

“The Blueprint will influence law enforcement response to sexual assault beyond Texas college campuses,” he said. “It replaces tradition with science.”

UT System Chancellor William H. McRaven, who has championed better policies and procedures to respond to campus sexual assault, said the Blueprint is an example of UT System police’s commitment to seek justice in sexual assault crimes with care and compassion on the basis of academic research.

“The Blueprint sets a new standard for law enforcement practices that will achieve a greater confidence from survivors that their victimization will be understood and responded to thoughtfully and empathetically,” McRaven said.

Last August, the system launched the most comprehensive campus sexual assault study in higher education. The $1.7-million multiyear study ranges from online survey tools for students; surveys and focus groups of administrators, faculty, staff and campus law enforcement; and a 4-year cohort study of students to identify the psychological, academic and economic impact of sexual violence.

In September, the system launched an initiative to teach college students intervention strategies to deter sexual assaults, cheating, suicides and racism. Known as the UT System Bystander Intervention Initiative, the program aims to empower students with knowledge on how to keep their peers healthy and safe.